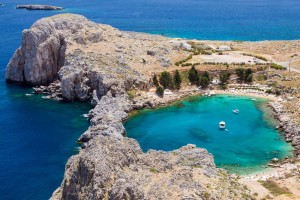 Rhodes the city is located on the island of Rhodes in the Dodecanese, Greece. It is the largest island in the group and one of the largest and most beautiful islands in the Aegean Sea. It is one of the oldest tourist destinations in Greece.  It was home to the Colossus of Rhodes one of the Seven Wonders of the World.

The city of Rhodes was founded in 408 BC, although it is believed to have been inhabited since about 4,000 BC and the Colossus of Rhodes was completed in 282 BC.  The Colossus of Rhodes was a statue that represented the people of the city’s sun god Helios.  It stood at the harbors entrance at an astounding 107 feet, then the tallest structure in the world. An earthquake hit the city in 226BC and the statue toppled. For 8 centuries it lay in ruins until it was sold to a Jewish merchant who allegedly needed 900 camels to tow it away. The Colossus has been written about many times over the centuries and most notably in Shakespeare’s Julius Caesar.  The fortress of Rhodes is one of the most well preserved medieval towns in Europe and is a UNESCO World Heritage Site.

The city is a major international tourist destination and is a major crossroads of Europe, the Middle East and Africa.  This has reflected over time in the culture and architecture of the city. The new and old town is divided by a medieval wall. They city is full of medieval architecture with castles and houses and its winding streets.  Further along the seafront the Italian occupation is notable with its Art Deco architecture.  Close to here is Mandraki where the market and tons of cafes can be found.  At the entrance to the port of the harbor two columns stand with deer atop them, this is said to be where the Colossus of Rhodes once sat. The main design of the Statue of Liberty is based off of what 19th century engineers believed The Colossus looked like.  There is a sonnet inscribed on a plaque located inside of the Statue of Liberty’s pedestal called The New Colossus by Emma Lazarus.